skip to main | skip to sidebar

I've been playing Warmachine alot lately. It's very fun. So, I've decided to scale back my Space Marine collection. I'm sellin the Wolves. If you're interested, here's a link to my Bartertown thread: http://bit.ly/fYWHOo
Posted by Johnny Foodmaster at 4:28 PM 3 comments:

I've been waiting patiently for my IA 10 to arrive. Its been a month and Forgeworld just told me they would ship me another. You'd think they'd put tracking on it originally. Guess not.

On a similar topic, it looks like some local gamers are gonna do the Badab campaign. That'll be awesome.

I haven't been painting 40k stuff recently, I've been messing with Warmachine. I really like the system. Ive played a few games and painted a few models. It's nice during 40k burnout periods. I chose Khador and my wife is gonna try Cygnar. We used to play Star Wars miniatures together. I sold her on WM by telling her it was like grown up SWM.

Im typing this on my droid, so I'm sorry about typos
Published with Blogger-droid v1.6.6
Posted by Johnny Foodmaster at 9:33 AM No comments:

Here's a couple of pictures of my first Rhino that I completed for my army. It's pretty basic. I didn't get into weathering or anything. That might be later. 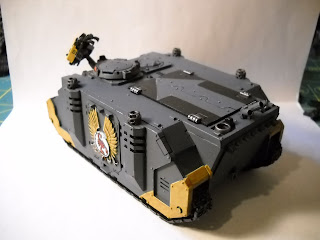 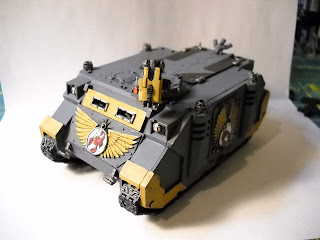 This the the Apothecary for my first tactical squad. I made an Apothecary and a Sargent in case I was playing in a regular game. 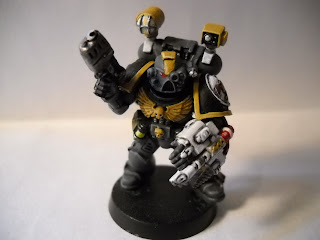 Here is what will be the pinnacle of the army. There is an brand new unbuilt Forgeworld Thunderhawk in that box. I've had it for about 8 months and I'm nervous about starting it. I started to clean it and I washed it. After I finish my list for a doubles tourney I'm starting on it. Here's the Thunderhawk: 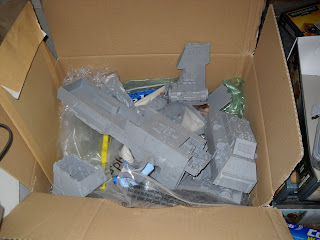 The doubles tourney has a force org restriction so that's why the list looks weird. Here's what I'll be playing:
HQ:
Master of the Forge w/Conversion Beamer

I've also cast bases that are supposed to look like ship decking. It's on the Dreads already, but I haven't painted the ones for the troops.
Posted by Johnny Foodmaster at 8:28 PM 7 comments:

Finally got the camera back! Red Scorpions pics!

A much needed update is upon us! I have finished 1 tactical squad with sargent and apothecary. I've also finished a Forgeworld Venerable Dreadnought and 3 regular double autocannon Dreads. Onto the pictures! 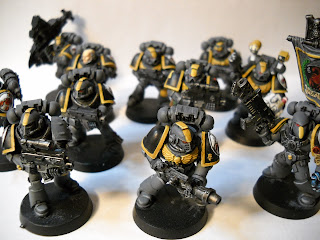 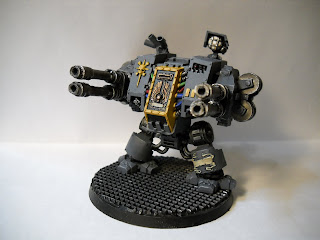 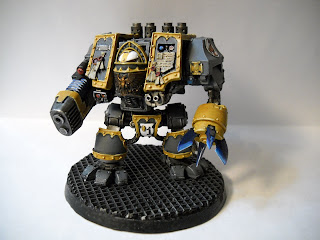 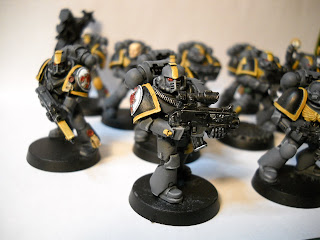 IA9 and the Red Scorpions have landed!

I placed a healthy Forge World order and it arrived on wednesday. I have decided that with my fanboy-ness of Space Marines I would have a regular Codex chapter (Salamanders), a Non-Codex chapter (Space Wolves) and an Imperial Armour Chapter (Red Scorpions).

So, I got my Forge World order and it was the start of my Red Scorpions army. I got Commander Culln, Magister Sevrin Loth, a kit of veterans with Sgt Haas, a bunch of tactical shoulder pads and some terminator pads. I've already got a FW Mk IV Dread that I'm going to use for this army. I also ordered some dreadnought autocannons. I want to have a line of 3 dreadnoughts with twin-linked autocannons. I think that'll just look so awesome on the table.

I've got a Space Wolf list to finish painting for a tournament in the next few weeks and then I'll begin on the Red Scorpions.

As I travel deeper into the Warhammer hobby, it seems that there are less friends with me.

The store I usually play at does not have a competitive player base. On the other hand, I'm developing a killer instinct.

The people I play with on a regular basis (except 1) don't paint. The one guy that does paint doesn't get to paint very often. On the other hand, I've been trying to take my painting to higher levels.

My wallet (and wife) weeps at my love for Forgeworld stuff. I'm a Space Marine fanboy and the new armor kits have made me a little crazy. I did get my Mk IV armor in the mail yesterday! On the other hand, my playgroup says it's too expensive for what it is.

I really wanna go to a convention like Adepticon, but noone else does.

I'm married and I have a full time job. I'm not made of money, but I could come up with money for a trip. My wife doesn't mind my hobbying. She's the best.

I guess the next move is to try to meet like-minded people on the internets. Now, I guess I've gotta go find em. I've also gotta figure out a way to get those other Forgeworld space marines.... and a Warhound Titan. Ha!
Posted by Johnny Foodmaster at 10:21 AM No comments:

I'm doing single Space Wolves at a time. Yesterday my non-mech Wolves force annihilated a Tyranid army. Pretty awesome. I decided to do the Mark of the Wolfen space wolves in the Pre-Heresy codex grey color scheme with the wolf helmets. I had some Chaos shoulder pads so I wanted to try them out too. I think it came out pretty good. So, here's a power weapon Space Wolf, a Mark of the Wolfen marine and a Terminator. 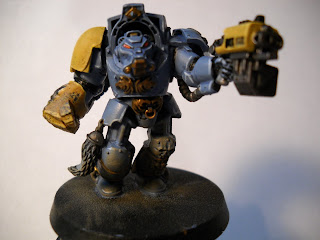 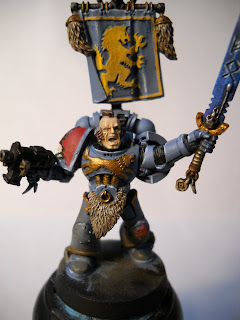 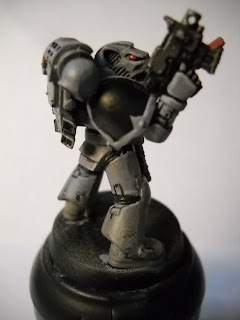 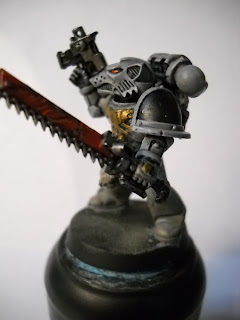 Posted by Johnny Foodmaster at 5:56 PM No comments: